The Temporal and A Temporal Trust Book Covers

The Temporal and A Temporal Trust are now available at Amazon (and soon elsewhere).

Originally, the redhead was the cover for book one (with a red background). I decided, however, The Temporal was more about Suteko and A Temporal Trust, about Kaileen. These covers are the result of much tweaking and experimentation over the course of the past year. Whew. I’m finally happy with them–I think.

Here is the first page from A Temporal Trust.

The old man’s eyes were wide, his mouth hanging open as if still in the process of releasing his last word. Sam couldn’t tell if it was from fear or simply the anticipation of the moment.

Sam closed his own eyes and shut out the world around him. Patterns soon emerged within his mind that represented Nephloc—the dark creatures under the enemy’s control.

“Three—no, four,” Sam said, opening his eyes and turning to Marcus who was not twelve inches away. “And they are closing in fast.”

Seeing a burgeoning smile, Sam determined the wide eyes were revealing anticipation and not fear.

Sam looked down from the rafters upon which they were hiding and watched as Suteko walked casually around a chair on the floor below. She wore her long, silky hair back in a ponytail. Her clothes were loose to enable quick and varied movements. She was dressed for battle.

She was the bait.

The Temporal – a 327 Page Supernatural Thriller

Posted in Book Covers, The Temporal

Spending Time with Madame Koochie, a Review of Zachary Pill by Tim Greaton

Tim is Maine’s other great author and, over the past year, I’ve gotten to know him through a mutual Twitter friend. He is always gracious with his time and generous with his advice as a writer. I’m embarrassed how long it took me to write this review. I read his book months ago and promptly forgot to write it. It is an excellent book, fun for all ages, however.

Fantasy–and in particular, young adult fantasy–isn’t my favorite genre. But Tim Greaton’s characters were just fun to get to know. He has a talent for characterization, something I know is very difficult to do right. Madame Koochie is a hoot!

In a matter of hours, young Zachary Pill finds his life shattered. Everything he knows to be a fact may not be so. His weakling of a father may be the strongest being on earth–and beyond! His love for plants may be more than a simple interest in horticulture. And bats! Vicious and nasty flying bats attack him for seemingly no reason. But perhaps these sorts of things often happen to kids with naturally green hair.

Let’s just call the book an imagination overload and a good time was had by all. If you are looking for lighthearted fantasy fun, check out Zachary Pill and his strange family. No bad language, “adult” situations, or graphic violence.

This installment gets you into the world and introduces you to the Pill family. If you find you like it, there are other books in the series. You can buy the three books in an omnibus trilogy set for less than buying the other two individually.

BEST OF ALL–it is free. Download it now for your Kindle.

BTW, my The Temporal is FREE today only. If you don’t have it, please also download my book!

Today and tomorrow, my first book The Temporal is free for Kindle (December 25th-26th). If you have a different device, just email me.

The Temporal
a supernatural thriller by CJ Martin

After his wife leaves him for a former friend, Sam Williams moves to Japan to start his life over.

But a quiet life for Sam was not to be.

A devastating earthquake in central Japan sends eternity crashing into time, enabling Sam to hear echoes of the past and even the future. Through the echoes, Sam and a mysterious Japanese woman learn of a terrorist plot that could plunge the world into turmoil and position a murderer as the leader of the free world.

They alone have the knowledge and ability to stop the plot.

But even with eternity on their side, can they stop it in time?

Posted in The Temporal

Tanaka, Sons of Redemption is coming soon. We are about a quarter through the last major revision before publishing (I hope). I started this whole writing thing with a short story called Tanaka and the Yakuza’s Daughter–still one of my favorite stories.

Here is the current working cover. Joe may have his quibbles about the figures in the sun. So it all may change. 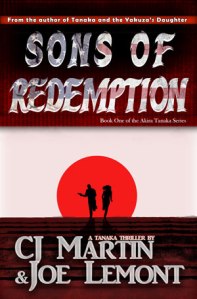 Here is a chapter introducing the bad guys:

The air in the small room was thick with cigarette smoke, heavy with the heat of a dozen computers and lit by twice as many screens. A bald man in a dark gray suit crushed out his Marlboro with one hand and continued flicking a remote control with his other, changing the view on the monitors.

Without turning, he spoke to the shorter man standing behind him, wearing a black woolen suit and a thick, spiked mop of completely white hair. “Let’s see if you got the right one.” He leaned closer to the screen, brushing off specks of ash, then turned to a shirtless younger man slouched over a computer keyboard. “Zoom in on him,” he ordered. The large dragon tattoo across the man’s back rippled as he tapped a few keys and reached for his own cigarette.

“That’s him, all right,” the bald man said as one of the monitors brought the distant figure into sharper focus. “It has been more than twenty years, but that’s definitely him.” The man’s face broke into a smile that seemed almost a sneer. “He seems surprised to see his own name. How very modest of him.”

“Look. They are going inside,” said the shorter man in a thick Russian accent.

From half a world away, the suits and the shirtless youth eavesdropped on the man and his daughter.

“Daddy,” the girl said, “what is this? What’s inside the envelope?”

The audio was laced with a little static, but anyone proficient in English could easily understand the words.

“Nothing,” the father responded.

A smile crawled across the bald man’s face. It felt good to be pulling the strings again. The shirtless youth held a set of headphones to his left ear, then put it back down and tapped a few keys on his keyboard. The view on one of the monitors changed to a grainy image of the man and his daughter inside their apartment, a small dog trotting over to greet them. The room was dark and the camera was not intended for low light, but the audio feed was better than before.

“Nothing? Why?” asked the girl.

“Quickly, go to your room and pack your things. Please,” the man said in a low, hurried, but otherwise collected voice.

“What’s going on?” the girl insisted, her voice cracking with obvious concern.

Suddenly the voices fell silent. The eavesdroppers heard unintelligible whispers and a few barks from the dog. Eyes wide, the bald man shouted, “Increase the volume!”

The black-suited man chuckled to himself and said, “Don’t bother. He knows that the apartment is bugged. We won’t hear their voices again until they leave.” He turned and tapped the shirtless man on the shoulder. “Are the tracking devices registering?” The dragon danced as the younger man turned away to check another screen, then turned back to give a thumbs-up.

“We are ready,” the black-suited man said. “They may leave their apartment, but they cannot escape my men.”

Within a block of Tanaka’s apartment, two men waited for Mikhail Sokolov’s command; they would follow the father and daughter wherever they might go, driving them toward the other half-dozen who could be called in a moment’s notice.

“Anyway, I can’t understand why you people don’t just kill him. Why make this so complex?”

The bald man looked him in the eye. “Mikhail, we don’t do things that way. Nee-san’s wish is to bring him here to Japan: alive if possible, dead if not.”

Nee-san was the most powerful woman in the organization. She was second in command, an extraordinary position for a woman in the yakuza. When the Oyabun—the boss—was away, she had complete authority. When he was around, she had his ear. All the men feared her and obeyed her commands to the letter, no matter the cost or the consequences.

The bald man continued. “But as stipulated in our contract, your pay is cut in half should he arrive without a pulse; you get nothing at all if the lack of pulse is due to your actions.”

Mikhail held his gaze, then shook his head and looked away. “The longer we draw this out, the greater the risk my men are taking. Now you tell me that he has CIA connections. This makes me nervous. I did not plan for that.”

“Should I doubt your ability to carry out the job successfully? Perhaps we are paying you too much?”

Mikhail’s mouth started to twist into a snarl but then he closed it, deciding it would be less risky to ignore the insult.

The bald yakuza smiled at him, attempting to look friendly but only managing to look predatory. “Don’t worry, comrade. If we can’t make him come to us, your men may kill him without a pay cut. But I am confident that he will come to Japan willingly.”

“When do you play your part in this?” asked Mikhail.

“When will that happen?”